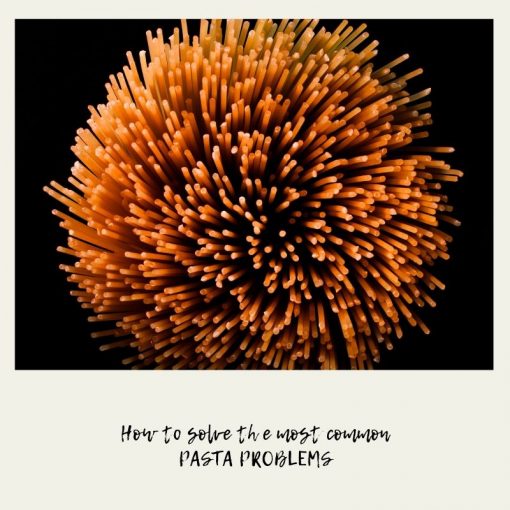 Pasta, in theory is an easy meal, but it’s not always straightforward to make the perfect kind of pasta you’ve no doubt enjoyed in Italy. There are a few common errors which can lead to pasta problems but avoided them will definitely improve your pasta skills.

Unhappy with the way your pasta turns out? Read our quick tips and you’ll soon get the hang of it.

Too sticky or clumpy?

TIP: Go for a big pan even if you are only cooking a small amount of pasta. For 500 g of pasta, you’ll need to use a pan that holds at least 5 litres of water and fill it about ¾ of the way up.

TIP: Put a lid on the pan of water, let it come to a rapid boil. Once you have added the pasta (and the salt) the temperature of the water will drop – stir the pasta and bring it back to the boil. Do not put the lid back on!

TIP: Always leave some of the pasta water in the pasta or set some aside in case you need it later. If the pasta is too dry it will clump together and the sauce won’t cling to it. The cooking water won’t dilute your sauce it will improve the texture of the dish.

TIP: The correct amount of salt per 100g of pasta, is 7g per every litre of water.

TIP: Don’t season at the end – always add salt before the pasta as it is better dispersed and the pasta will absorb some of the salt improving flavour.

TIP: Only cut down on salt if your sauce is going to feature salty ingredients such as anchovies or bacon.

TIP: If you are unsure whether the pasta is cooked, taste it and if it’s too hard wait one more minute and taste again, it should be firm to the bite.

TIP: Come back and stir the pan every now and again throughout cooking to be safe, as well.