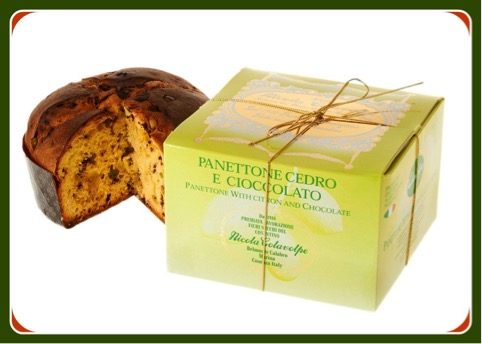 Christmas time in Italy means an abundance of traditional sweets and cakes to be shared on festive tables and gifted to loved ones. The most popular by far is Panettone! Every year Italians buy on average five of these traditional Christmas cakes and more than 100 million are produced in total.

A Sweet Bread Filled With Wonder

Panettone is a typical Italian sweet bread, more precisely; it is a speciality of Milan. This soft, doughy treat has some very simple ingredients: flour, egg yolks, butter and water, to which are added candied orange and lemon peels as well as juicy sultanas.

The secret to its delicious flavour and fragrance are the multiple phases of its leavening. To produce a soft and airy Panettone, Italian bakers start by making the dough days ahead from the mother dough or “lievito madre”, that is a small piece of a former dough base made with flour and water which has to be left for 48 hours at a medium high, moist room temperature in order for the lactobacilli and natural yeast to form. Once this is done, you must refresh the dough for 14 days with flour and water and, at the end of this cycle, your sourdough will be ready. This type of dough can be kept in a glass jar covered in cellophane for virtually months, just by freshening once a week with flour and water.

Once the sourdough is ready, it is mixed with the base ingredients and left to rise three separate times. Next, the dough is cut into small pieces and placed in the moulds where it is left for the final leavening, which will also give it its typical, cylindrical, chef-hatted form. The Panettone is then cooked for about 50 minutes at 190° and left to cool upside-down.

There are many popular legends surrounding the creation of the first Panettone. One of the most credited is the story that wants this scrumptious sweet bread to have been the life saviour of the cook of Ludovico Sforza aka ‘The Moor’. 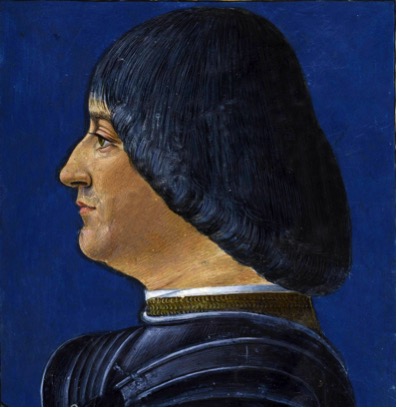 The legend goes that, during a Christmas dinner where the cook had been requested to prepare a sumptuous feast for a huge number of guests, the dessert was forgotten in the oven and completely burnt. The cook was desperate and already imagining his master hanging him for such an unforgivable distraction, but luckily, a young servant had kept aside a small batch of the dough used by the cook and had mixed it with eggs, sultanas and candied peels, hoping to have the chance to eat it later that day. The servant suggested they bake that batch and serve it to the guests of Ludovico The Moor and the cook decided it was worth giving it a try as no other solution was at hand. At the end of the banquet the bread was served and the guests enjoyed it with such a passion that the cook was called out and asked the name of such a heavenly food. He replied: “È il Pan del Toni”, meaning that that was the bread made by Toni, the servant, and from that phrase it is said that the name Panettone originated.

Another interesting legend is the one regarding Ughetto degli Atellani who lived in one of the districts of Milan in the early 1400’s. He was a nobleman but loved the daughter of a local baker. In order to be near her, he started working as an apprentice with her father and one day came up with a new recipe for sweet bread made with flour, eggs, sultanas and honey. The bread was so greatly appreciated by the locals that the bakery flourished and later Ughetto and the baker’s daughter fell in love and got married.

…To The Real History Of Panettone

But the true origins of Panettone date back much earlier than the 1400s. In the 1200s there are already traces of some sort of sweet leavened bread, mixed with honey, sultanas and squash. Then, over time, it changed from a flat kind of bread to a stuffed wheat bread, until it became the delicacy we now know of.

The true tradition behind this dessert lies probably in the ancient ceremony of the Ceppo, a piece of wood that was traditionally burnt at Christmas. The Father of the family usually sat around the fire with all the other family members and divided a big piece of bread among them.

During that time until the late 1300s, most of the bakers of Milan were not allowed to bake wheat breads, only those who baked for the higher classes had permission. Yet, at Christmas they were exempt from this rule and could all bake freely only on that special day. This is more likely where the Panettone tradition started.

We need to move on to the 1600s to find a few written testimonials of the evolution of this treat. It was in fact added to the Milanese-Italian Dictionary in 1606 and had an even more detailed description in the 1836 Vocabulary of Francesco Cherubini.

Rites and Beliefs Tied To The Panettone: The Rito del Ciocco and the Panettone di San Biagio

Quite a few traditional rites are practiced in the Italian culture, which have links to the Panettone. One of these is the Rito del Ciocco: On New Year’s Eve the Father of the family would place a golden or silver coin in the dough of a kind of Panettone called Pan Soffice and the lucky one who got the slice containing the coin would get to keep it. This was a fun way to start the coming year with a smile and a bit of cash!

Another interesting practice well embedded in Italian festive traditions is the one of setting aside a small piece of Panettone during the Christmas dinner to eat it together with the family on the 3rd of February, the day of Saint Biagio, as a ritual to ward off sore throats and colds. Usually on this day, retailers lower their Panettone prices in order to get rid of them quickly.

Panettone Today And Its Many Varieties

Nowadays, Panettone has become an Italian staple and more than just a Milanese tradition. One of the first companies to make modern, industrial Panettone was Motta. This company is the one that gave it its actual shape, being the first ones to use a mould and also the typical brown, non-stick paper that wraps all around this delicacy. They are also the ones who decided to increase the amount of fats present in the recipe, raising them to around 600g of butter (NEVER margarine!) for 1kg of flour.

In Piedmont, another famous bakery, the Balocco Company, decided to make a different version of this recipe making it a bit lower in height and by adding a hazelnut icing with nuts from the nearby region of the Langhe. This new version of Italian Christmas cake was called Galup, which in Piedmontese means ‘scrumptious’. 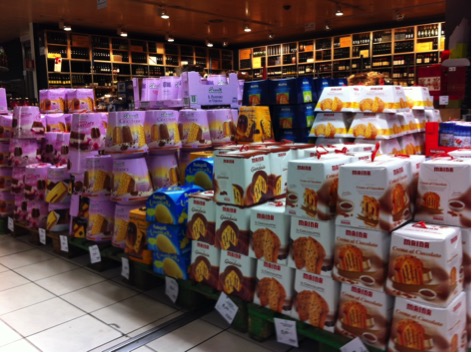 Today there are many varieties of panettone which still keep the traditional dough recipe but have different fillings or extra indulgent ingredients. Some varieties include chocolate filling, Limoncello cream, yoghurt, powdered cocoa and fruit jellies. Some companies now also produce vegan, eggless or gluten-free versions too. 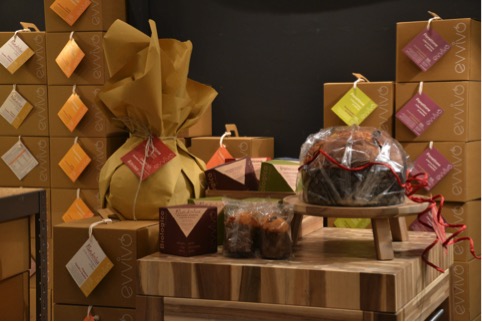 Go into any Italian supermarket from September onwards and you’ll find the shelves piled high with Panettone which have been industrially produced by companies which have dominated the scene for years such as the abovementioned Motta, Balocco, Vergnani, Melegatti and many more. Aside from these, there are also a number of excellent historical artisanal companies, located in different parts of Italy (both North and South), which have been baking Panettone for years following family recipes and traditional methods. These you might be lucky enough to find in speciality cake shops and delis. Among the best known are: Colavolpe in Calabria and Evvivo in Milan. 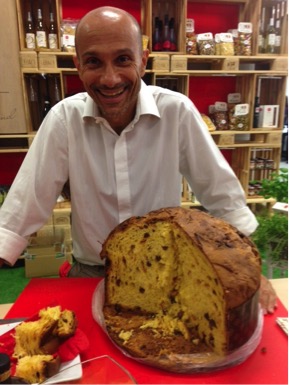 Evvivo is a company which has become known for its healthy food concepts, expressed in the many exciting products they make with passion and care. They have come up with some innovative, wholesome recipes created with selected ingredients from local farmers. Their best sellers are a healthy vegan alternative to the classic Panettone as well as one made with olive oil instead of butter, drastically reducing the calories and saturated fats (about 70%) in it. Other delicious varieties of this treat are the Goji berries Panettone and the Gianduja version, which is made with the typical special chocolate blend from Torino which is absolutely addictive!

Re Panettone: The Yearly Panettone Expo

With its first edition in 2008, Re Panettone (an event created by Stanislao Porzio) is the greatest Panettone Expo ever! This interesting showcase of the Milanese goodie, takes place in Milan every end of November but has also taken place in other cities in Italy. This year it will showcase in Milan between the 26th and 27th of November. You can get your free tickets on this website just by registering to Re Panettone. 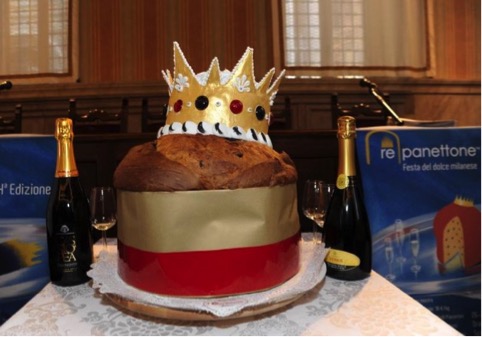 Panettone Manners: How To Eat The Sweet Bread According To Etiquette

Even a traditional dessert such as the Panettone has its specific etiquette, which reveals how to eat it in public without making any mistakes! The rules are that if the Panettone is served just as it is, without any creams or sauces, you can absolutely eat it with your hands, holding it with your right hand and breaking off small bits that you will eat with your left hand. If the bread is accompanied by a light sauce, a filling or a cream, it is considered appropriate to eat it with a dessert fork and a knife, cutting small pieces that you will dip in the sauce in order to savour the fragrant treat in all its deliciousness!! 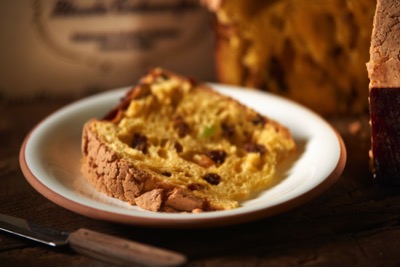 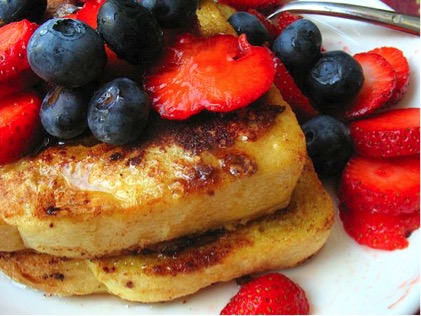 How do you eat yours? Tell us about your panettone traditions and send us your favourite recipes, we’ll share them on our blog!